SPRINGFIELD TENNESSEE: (Smokey Barn News) –  Just after midnight on February 28th someone broke the front glass doors of Dorris Milling Company located at 5 N. Main Street. The male subject was caught on surveillance video entering the store and making off with approximately $800.00 of Red Wing work boots and approximately $1800.00 of Case pocket knives. A glass case (pictured) was also stolen. 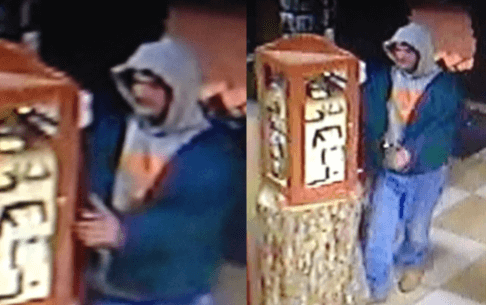 Then on Tuesday March 1st around 1:AM police were called to the Belk department store located in the Center Stage Shopping Center. Officers found the front window had been broken.  Nothing was taken because the suspect could not get past a security barrier.

Later that same night just a few blocks away an officer patrolling the business area of Willow St. found a broken window and an open door at the Antique Barn. Officers conducted a search and found no one inside. According to an employee, no property had been taken. For Smokey’s full story on all three crimes and others that detectives are working on click here.

For the burglary at Dorris Milling Company and the vandalism at Belks Department store Brietenmoser has been charged with Burglary, Theft of Property and Vandalism and is being held at the Robertson County Detention Facility on a $64,000 total bond.

Brietenmoser told police detectives that he had nothing to do with the vandalism at the Springfield Antique Barn and has not been charged for that incident.