CEDAR HILL TENNESSEE: (Smokey Barn News) – Thursday night, April 21, 2016, at 6 pm, was the last public concert of the year for the Jo Byrns High School Band directed by Randall Lynch. The Jo Byrns Middle School gymnasium was full. This was the last performance for the high school seniors. Graduating Field Commander Cheynne Plank of Cedar Hill served four straight years and graduates this year. The new Field Commander for next year will be Mille Jent of Barren Plains. 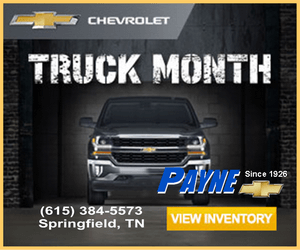 Mr. Randall Lynch has grown the Jo Byrns Band to it’s current level of 23 students. “Next year will have more than 31 students,” Lynch said. The spring concert and banquet was a great success. Students, parents, and teachers stayed for a pot luck meal after the concert.

Mr. Lynch gave a very moving speech about his experiences and emotions watching these young performers grow and learn through the years. These students clearly moved Mr. Lynch. “People don’t realize how much time and work these young people have put in. They invest their time in music as well as keeping up with their regular studies,” Lynch said.

The Jo Byrns Band took more than 20 competition awards this year, including Most Entertaining Band at the Trousdale County Invitational in Hartsville Tn.