Mention E.M.A to any Firefighter, Police officer or E.M.T they they will know

We all know what a Firefighter is, we all understand (at least generally) what a 911 dispatcher does, most people understand what the police do and most of us have a pretty good idea what’s going on when we see an ambulance drive by with lights and sirens blazing away— but mention E.M.A. and most people will give you a blank stare.

Mention E.M.A to any Firefighter, Police officer or E.M.T and they will know exactly what you’re talking about, the Emergency Management Agency. Smokey Barn News has interviewed E.M.A. personnel on many occasions. We’re used to seeing E.M.A. at the scene of any major accident, fire or chemical spill.

E.M.A. can be found at any emergency that has the potential to interrupt local infrastructure or harm citizens. They are an integral part of all the emergency response/resource capabilities that are available in Robertson County. E.M.A. is a 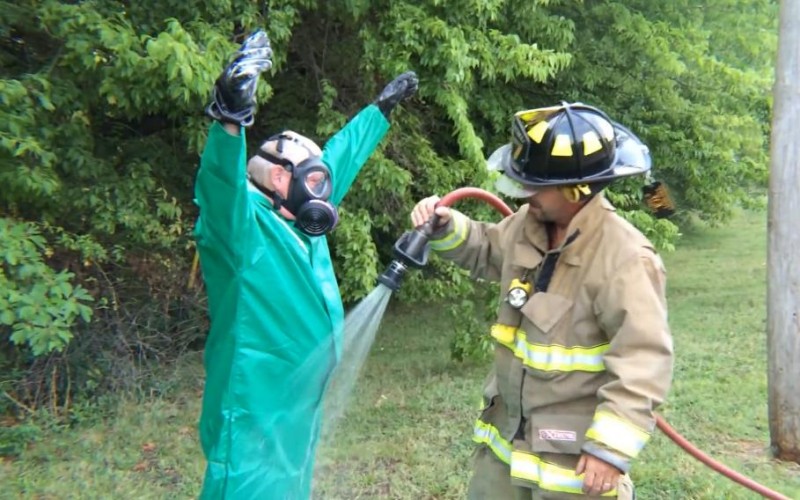 resource agency utilized by every department and agency within Robertson County. Though very capable independently, think of E.M.A. as the oil that helps all of our first response teams operate more efficiently, whatever they need,  E.M.A. will get it done.

Remember that Chemical spill at Greenbrier High last year? That was E.M.A. in the funny full body suits, thay came in to clean up the spill. E.M.A. were also the ones that responded to that ACID spill at the Robertson County office building last June.

Remember that hand grenade someone tossed out in the middle of Hwy 41S back in 2013? That was them too. E.M.A. was the agency tasked with the job of carefully collecting and transporting the grenade in a blast proof container to a safe location where it was destroyed. 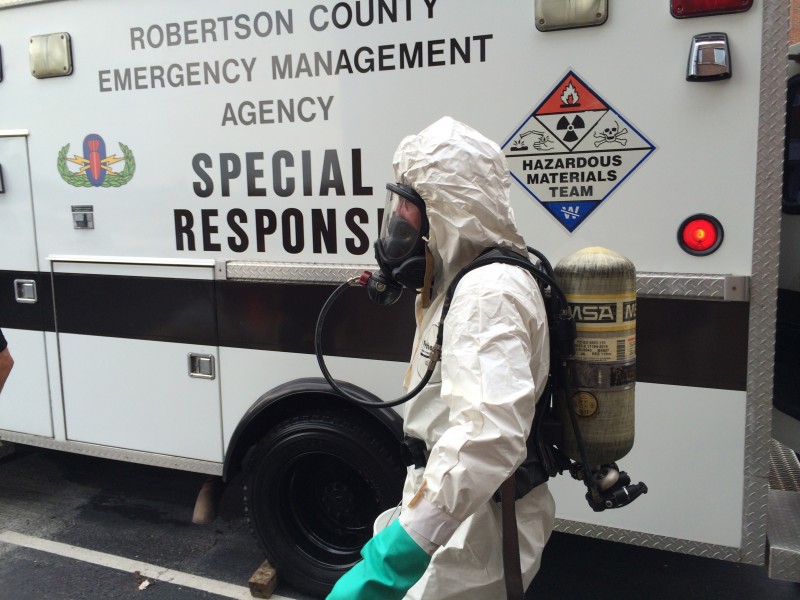 If that didn’t make their job dangerous enough, they also respond to radiological and biological  emergencies.

This weekend Governor Bill Haslam’s inauguration ceremony was held at the Legislative Plaza in downtown Nashville. In attendance was more than 1,000 people. With the situation in Paris and other global tensions, security was taken seriously for the event. Most of the security measures that were put into place for the Governor’s inauguration we’ll never know about but there was one team in attendance that was ready just in case, that’s right, you guessed it, E.M.A..

For the inauguration, it was called “The Rapid Response Team” and it was their task to “assist local and state authorities in the safety and assurance of continuity during the inaugural event.” If you didn’t know what you were looking for you would probably never see them but they were there and ready to leap into action in the event of a situation.

Our own Robertson County E.M.A. Director R.L. Douglas was asked to be a part of this very special inauguration Rapid Response Team that would be tasked with absolutely nothing unless the unspeakable happened, then they would go into high-gear with a host of services that could mean life and death to victims.

The E.M.A. Director’s involvement was triggered with a letter to Robertson County Mayor Howard Bradley asking for E.M.A. support for the event, they wanted R.L. Douglas. Howard Bradley was honored to offer the assistance of Robertson County’s highly skilled  E.M.A.  for the inauguration ceremony. “It’s a great honor for Mr. Douglas to be asked to participate in the Governor’s inauguration. It’s a testament to the work that he’s been known for throughout Tennessee for more than 30 years. We are very proud of R.L. and Robertson County E.M.A.,” Bradley said.

We are very fortunate as a county and a nation to have all the incredible services available to us when we find ourselves in an emergency and even more fortunate that so many fine men and women are willing to invest in all the training needed to bring these services to life.