REPORT UPDATED 4/6/2021:  EMA releases names of occupants.  The aircraft is removed from the crash site, see photos below. The investigation is ongoing.

SPRINGFIELD TENNESSEE: (Smokey Barn News) – An airplane has crashed in Robertson County just outside Springfield and two people were injured.

The small aircraft carried two occupants.  Reportedly the craft is a twin-engine Piper PA 23. Smokey Barn News has confirmed that the aircraft is part of a local flight school Highland Rim Aviation and carried an instructor and one student.

The crash occurred near Kinneys Road and Airport Road just outside Springfield, one mile from the Robertson County Airport. LOCATION OF CRASH

The crash occurred just after 10 AM.

We are at the scene and working with officials to get more information. If you are traveling in and around Springfield use caution and watch for emergency traffic.

According to Robertson County EMS, two male patients (a 31-year-old and a 34-year-old) were transported by ground to Skyline Medical Center in serious condition.

UPDATE: The Robertson County Emergency Management Agency has released the names of the occupants. They are identified as Noah Ketler and Jason Bredlau. Both survived the crash. An official update on their medical status was not available.

Jonathan Parker, Springfield resident said his girlfriend saw the plane turn, go down and then disappear.

Another neighbor said she heard the aircraft and then what sounded like large limbs snapping and breaking.

According to Chance Holmes, the Director of the Emergency Management Agency the FAA and the NTSB will be at the crash site later today to begin an investigation into the cause of the crash.

Philip Head, a Robertson County resident and a tobacco farmer his entire life, has owned the property since 2014. Head expressed his concern for the victims. “I hope the victims survive and have a full recovery.” 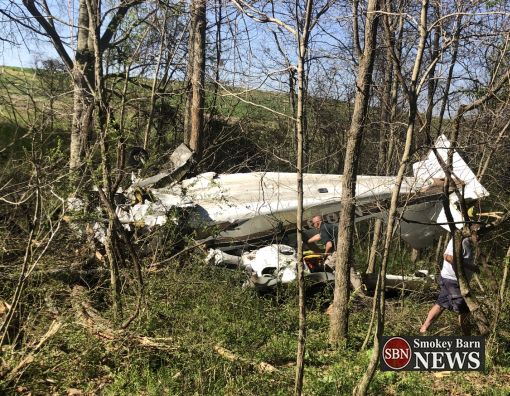