A section of the Royal Inn has been deemed unsafe and has been “Condemned,” according to Springfield Codes Administrator Mark Fields. Smokey has been following this story for several months now, to refer to the entire hotel as condemned would not be accurate. The section in question is the back upper and lower level of the hotel which consists of about 25 rooms or about half of the hotel. 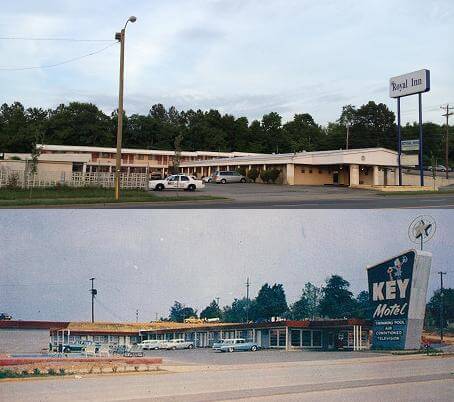 The Royal Inn is an older hotel in Springfield dating back to the 1950’s and has no doubt seen better days. The upper level of the structure was added later as you can see in the photo of the hotel probably taken in the late 50’s or early 60’s. According to Fields, there are problems with load bearing members supporting the upper section of the back part of the hotel and he believes there is some risk that someone could come through the floor.

The city of Springfield paid $1000 to get outside structural engineer Michael Vines, SE from Brentwood to do a full inspection on the hotel. The city was looking for an independent evaluation from someone that had no ties to the city. The report came in on the 18th of August and the very next day there was a fire at the hotel and seven days after that a guest passed away in the hotel. 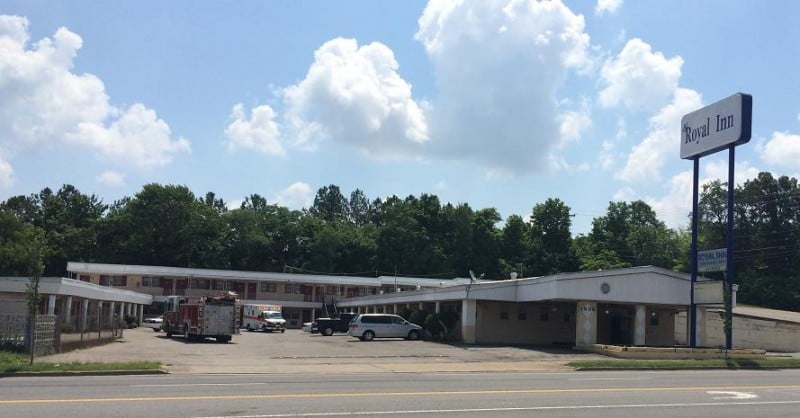 In all, according to a research report obtained by Smokey Barn News, in the last 12 months there were over 123 calls made to 911 for police, fire and medical to the hotel’s address.  Compare that to two other local hotels, that’s  5 times higher than one and 50% higher than a second hotel we looked at, both in Springfield.

The building was officially condemned on August 28th and a set of orders was given to vacate the back section of the hotel. Fields said, a “slum clearance hearing” was held on Thursday and an order for the back part of the hotel to be removed was made.  According to Fields the owners can appeal the decision.  The city doesn’t believe repairs can be made at a reasonable cost compared to the value of the condemned portion of the hotel.

The tax assessor values the property at $444,000, Fields said. Since the back section represents about half of the rooms you would cut it’s value in half to get the total $222,000, so the city is saying that the repair costs would exceed $111,000. Fields believes it will take over $300,000 to do the repairs needed. John Galloway, a contractor hired by the city with Impulse, INC. General Construction Division from Mt. Juliet estimated the repairs cost to be about a million dollars.

We don’t have numbers of occupancy but the guests have been given 30 days to leave. That time frame would suggest the issues are not immanently dangerous to the guests.

Mr. Patel, one of the co-owner’s of the hotel, did confirm the news with Smokey on Thursday. Patel said he plans to make a statement after the meetings with the City of Springfield are completed.

The Springfield Codes Department began to investigate the hotel after complaints were made by the hotels guests, Fields said.

It will likely take time for the city and the owners of the hotel to work out a settlement so it is unlikely that bulldozers will surround the hotel anytime soon. The development does suggest, though, that the hotel’s owners will be forced to make some hard decisions in the coming months.

As far as saving or repairing the condemned section of the hotel the dilemma the owners will face is an ordinance that states that when the repairs of a building reach 50% of the structure’s value the city has the authority to have the structure removed regardless of the owners desire or ability to pay to repair the building. This means the city can actually deny the owner’s ability to repair the damaged section and force them to tear it down even if they want to spend the money to fix it..

The ordinance is called the Slum Clearance Ordinance, it’s actually a state law adapted by the Springfield Mayor and Alderman passed/adopted about 10 years ago. It’s in title 12 of the municipal code. It was intended to deal with blight. “It’s a process of how to deal with dilapidated structures and get them gone,” Fields said. Under the Slum Clearance Ordinance Fields says he has already demolished about 200 structures in Springfield in the last 4 years. Field said Paul Nutting, the city manager and the Mayor Billy Paul Carneal have asked the Codes department to do what they can to clean up Springfield. “The goal is to make Springfield a clean safe place and we do something everyday to that end,” Fields said..

We have the building code, fire code and we have property maintenance code, this building violates all three, Fields said.

Fields said, the owners of the hotel have 30 days to appeal the decision and the process from start to finish can take six months to a year to reach the point of demolition.

Whether the building is torn down or repaired the owners of the hotel must foot the cost. If it is determined that the back section must come down and the owners refuse to comply, the city will ultimately bring their own equipment in and remove the structure. Before the city shows up with bulldozers there is a process, it will start with an appeal to the construction board, if the board denies them they can appeal to the mayor and alderman. If they lose there then he can file an injunction in chancery court.  The entire process could take a year, Field’s said.

In the mean time the part of the hotel that has been condemned will be sealed off and boarded up. It will stay that way until the condemned section of the hotel is repaired or torn down.

Smokey will of course continue to track this story as the building makes its way through the system. 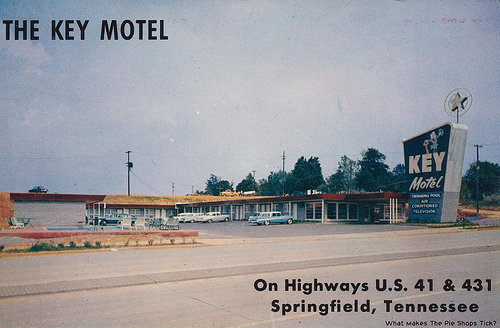