SHERIFF: Another Burglary Suspect In Custody 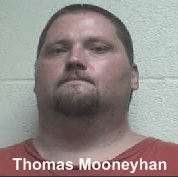 Mooneyhan has been charged with Aggravated Burglary and Theft over $1,000 for the incident, according to a release from the Robertson County Sheriff’s Office.

Mooneyhan was already in the Robertson County detention facility on other charges stemming from an arrest earlier this month, officials said. On August 2 Mooneyhan was charged with Driving on a Revoked License (sixth offense) and possession of stolen property (Theft of Property over $1000.00) from a theft in Guthrie, Kentucky.

“This is the third set of burglaries (1st – 2nd) we have solved in the last two weeks,” said Sheriff Bill Holt. “We appreciate the watchful eye of the citizens that have reported information on suspicious activity. Those leads help our investigators locate suspects and bring people to justice for these crimes.”