GREENBRIER TENNESSEE: (Smokey Barn News) –  A flyer that is appearing in mailboxes and the Citgo gas station on Hwy 41 in Greenbrier is causing confusion, according to officials in Greenbrier.

The confusion comes ahead of a city meeting planned for tonight (Monday) at 7 pm in which the city will have the final reading on a property tax increase.

Below is a copy of the actual flyer sent to Smokey Barn News by City Recorder Rachel Slusser. According to Slusser, if you have received a modified flyer with information added, edited or removed, it was not done by the city.

“There seems to be a lot of confusion on the flyer that is going around town, said City Recorder Rachel Slusser. “First, this isn’t a flyer that the City produced. (The flyer below has the correct info)

“Regarding the public notice: there are three columns: column one are audited numbers, column two is an estimate of what I think the city is going to spend by June 30, 2019, and column three is the proposed budget numbers for this budget year.

“The salary number (in the first column) from the audit includes salaries, taxes, and benefits for all employees paid out of General Fund. The salary amounts for columns two and three include salary and overtime numbers only. There isn’t a way that I can change what external auditors put in their report. Once again: For columns two and three, this amount is for salaries and overtime ONLY.

“I received clarification of what to include during a budget class in February hosted by MTAS. The “other” line item is everything other than amounts in the salary line. On the line that says “TOTAL EXPENDITURES”, if looked at correctly, one would see that the audit number total for both “salaries” and “other” is $3,462,182 and the proposed budget total for “salaries” and “other” is $3,304,707.

“I don’t know who is responsible for spreading the misinformation.  I wish that they would have asked for clarification by me prior to getting the entire community in an uproar. I have only talked to two citizens since 1st Reading. The City and the citizens should be working together to move the City forward. From my calculation, the average home would see about a $15-20.00 increase per month. Of course, it depends on the assessed value of the property. The greater the assessed value, the higher the increase.”

The meeting is tonight at 7 pm at Greenbrier city hall for any citizens that would like to attend. 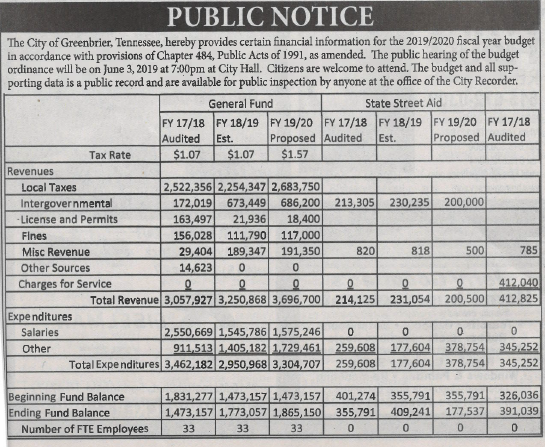